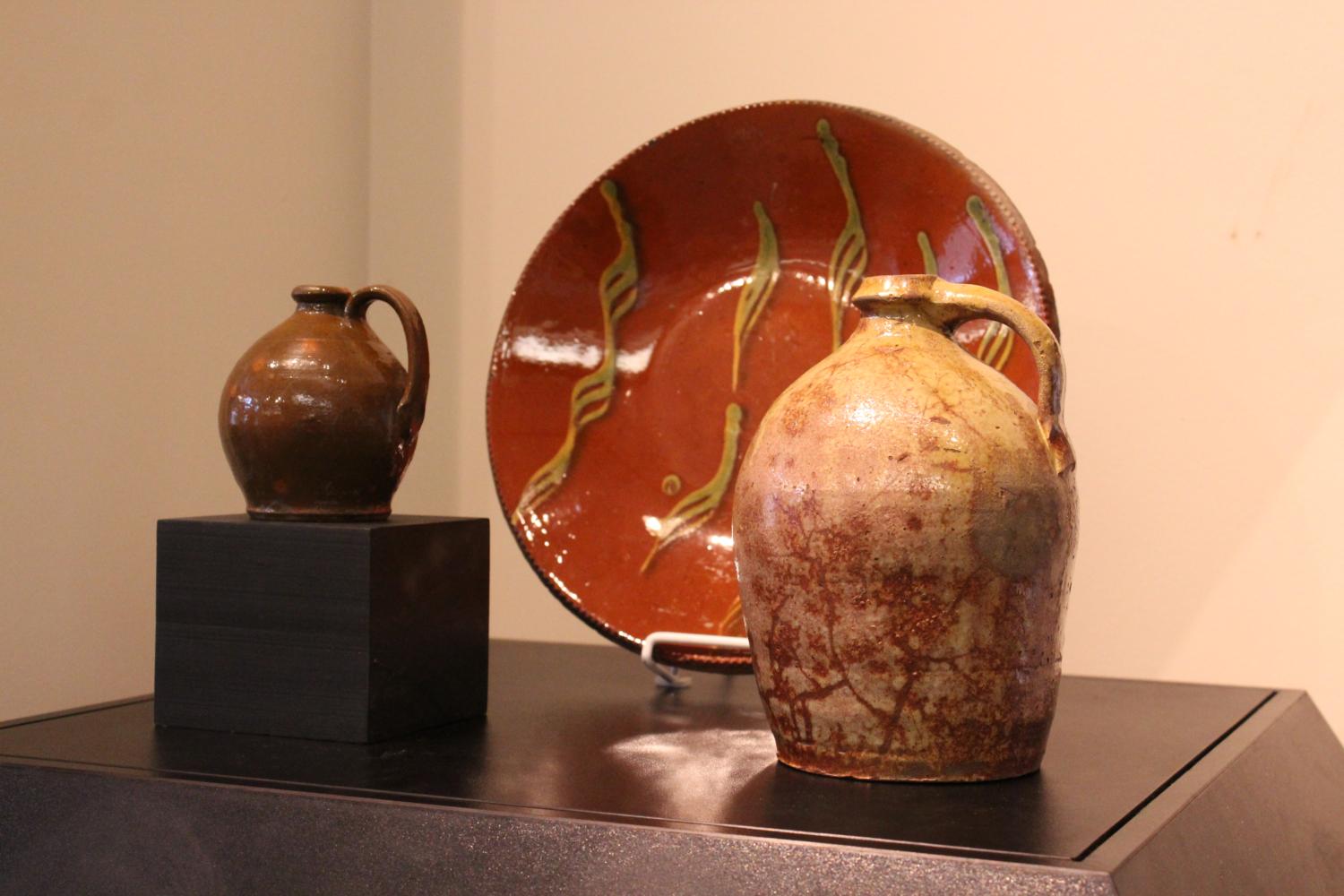 “Thrown, Fired, and Glazed: The Redware Tradition from Pennsylvania and Beyond,” is launching its second year with NEW items that will surprise and perhaps even amaze you.  The exhibit will run March 2020 through June 2021.  This year’s showing will include not only rare older items, but also some newer examples of how this artform has evolved.  You will find both decorative and utilitarian forms.

The exhibit focuses on redware produced in southeastern Pennsylvania but also showcases pieces from England, Germany, New England, the South and the Midwest.  The objects date from a 1684 piece to the work of today’s traditional potters.

American redware was brought by English and German immigrants to the United States and was the type of pottery most Americans used from the 17th to 19th Centuries.  Local potters, mainly farmers, dug clay from their land when they were not farming.  The high iron oxide content gave the pottery it its characteristic red color.

In addition to many exceptional and rare pieces, Landis Valley is proud to exhibit a Snow Hill Nunnery slip decorated redware soup bowl, early 19th century, that was acquired by Landis Valley during the yearlong planning of the exhibit.  This 11” diameter bowl is attributed to the Bell pottery family of Waynesboro, Pennsylvania and is among the rare few to survive.  The bowl was used to serve stew during the Love Feasts, a special Communion meal, at Snow Hill Cloister, which existed from 1798 to 1889.

On exhibit, is also a SATOR plate, c.1880 that was part of the Pennsylvania German tradition of powwow.  Pennsylvania Germans believed that they could extinguish a fire without water by drawing the SATOR pattern on a plate and tossing it into the fire.  Collection of Patricia and Donald Herr

There are also significant pieces on display that have never been seen by the public.

In addition to individuals who so kindly loaned us pieces for this exhibit, here is a list of organizations that lent us items for this impressive showing:

This exhibit is made possible by a generous grant from the Richard C. Von Hess Foundation.

Form is deprecated, please cotact the webmaster to upgrade this form.

Form is deprecated, please cotact the webmaster to upgrade this form.

If inquiring to a specific department or staff member, please select the appropriate department tab.